Beyond the Bamboo Curtain

Below is the essay I wrote and submitted for the World Nomads Caribbean Travel Writing Scholarship 2020 — the opportunity to embark on a fully-funded field assignment. The content had to fit under one of three themes and could be no longer than 700 words. If you’d prefer to read my writing on the World Nomads website, you may do so here.

I expected the somber atmosphere that of which often hangs as a veil over massacre sites. The heavy shroud of charcoal smog that blanketed Beijing since April had finally lifted overnight; and my skin tingled from the warmth of the sun as I descended upon the gates to Tiananmen Square.

The metal detector shrieked as three military officers pulled a man to the side. Automatic assault rifles hung at their waists as they patted the upper and lower halves of his body while simultaneously asking him a slew of questions in Chinese.

After placing my purse on the table, a military man probed through my belongings with a small baton as I shuffled through the metal detector. Met with only silence, my bag was quickly shoved into my hands as the officers shouted for the next in line to step forward. I had passed their test.

Clusters of cameras were perched at the top of every lamppost bordering the square and armed military men patrolled the walkways, their eyes scanning every inch of the grounds. We were constantly under surveillance, but that was normal in China.

Gazing around the square, this was not the first time my feet met soil memorialized by tears and bloodshed. My mind drifted into a reel of Western media coverage from 1989: students peacefully protested for democracy, free speech, and a free press in China. Chinese troops fired upon protesters. Civilians ran screaming. People collapsed to the ground after being riddled with bullets, their shirts drenched in crimson as those around them scattered for their lives. Blood flowed from the dead onto the walkways, quickly growing from a stream into a red river as the body count rapidly increased. The number of fatalities was never confirmed, but some Western media outlets reported anywhere from several hundred to several hundred thousand.

The laughter brought me back.

I glanced toward a father chuckling with his son as they pulled at the strings of a colorful kite waving wildly in the air. Elderly Chinese men and women traipsed about, and a cart vendor poured batter onto a sizzling grill.

Families flocked toward the Forbidden City’s entrance, and couples smiled as they snapped photos of each other. Everyone was happy. I stood among the crowd, alone, as my heart mourned. 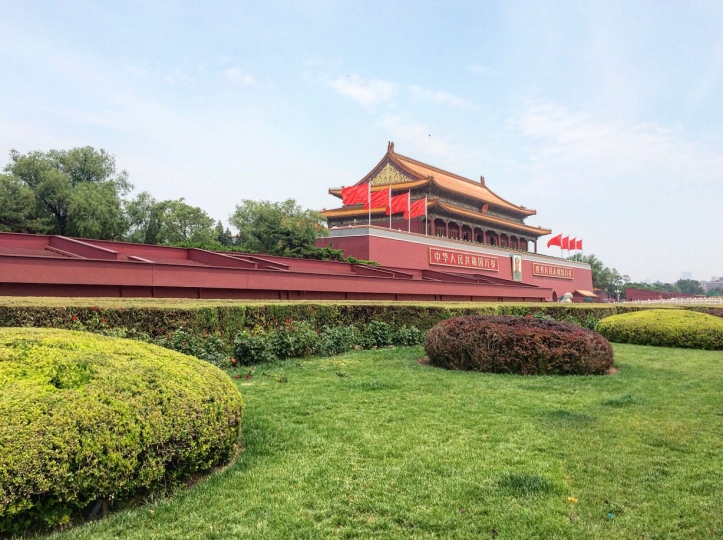 The next day, I returned home to Zhengzhou. My Chinese students and coworkers often boasted of China’s 3,000 years of well-documented cultural continuity; but after scanning several local search engines, there was still no mention of the Tiananmen Square Massacre.

A knock at the door tore me away from my computer. It was my neighbor, Mengmeng. We rolled dough for traditional Chinese dumplings as I shared details about the intricate architecture in the Forbidden City. She laughed as I regaled her with the moment I was attacked by angry bees on The Great Wall.

“Tiananmen Square was sort of strange,” I casually segued, “People were so lighthearted at the location of a massacre. There wasn’t even a memorial for the victims.”

Mengmeng scrunched her face, confused. “Tiananmen Square is very historical in Chinese culture,” she looked up from her dumplings, “there was never a massacre there.”

Returning to my laptop, I typed Tiananmen Square 1989 into the search bar. The page turned black. Frustrated by China’s internet regulations, I activated a virtual private network and created an outside connection into Australia. After clicking refresh, thousands of results filled the page: military tanks rolling over anyone in their path. Tank Man, the unknown protester who stood in front of a column of tanks departing Tiananmen Square. Students carrying their injured friends, and people fleeing as soldiers fired upon peaceful citizens with automatic weapons.

Eyebrows raised in disbelief, Mengmeng’s mouth hung agape as she scrolled through the images. Her eyes welled up with tears, “I have never heard of this before,” she helplessly wept. “I cannot believe this happened in my country.”

I sat by her side as she soaked in a new version of the truth, finally walking beyond the cloak of censorship. The country she knew was forever changed, but she slowly took back her power with every step beyond the bamboo curtain.